★ ★ ★ ★ - Milwaukee Journal Sentinel
Wine Spectator
Best of Award of Excellence winner since 2006.
Named one of America's Top 100 Wine Restaurants by Wine Enthusiast in 2017.

Bacchus - A Bartolotta Restaurant is set in a sleek, stylish space in the Cudahy Tower in downtown Milwaukee. Its menu emphasizes seasonal ingredients and its wine list is among the most extensive in the city. Bacchus offers several exclusive spaces for private events, including a glass-enclosed conservatory. 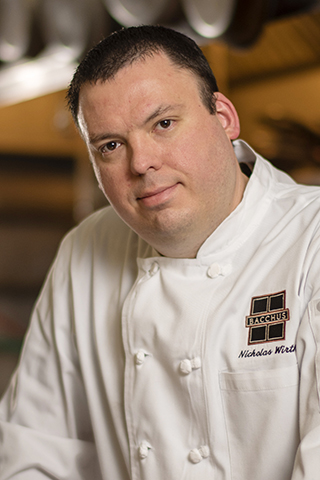 A Wisconsin native, Nick worked at Bartolotta’s Lake Park Bistro and Sanford before moving to New York to attend the Culinary Institute of America. While in school, he worked for Norman van Aiken of Norman’s in Miami and at the noted Vidalia in Washington D.C. Nick graduated in 2006 and moved back to Wisconsin in 2007, rejoining the Lake Park Bistro team as Sous Chef.

He made the move to Bacchus in 2009 and became Chef de Cuisine in 2011. In 2014, all of Nick’s talent and hard work paid off when he was promoted to Executive Chef.