The Bartolotta Restaurant Group has announced Chef Zach Espinosa will move to one of the group’s most popular restaurants, following departure of Chef Dane Baldwin. 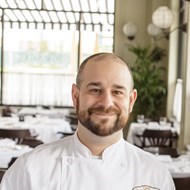 Chef Zach Espinosa has recently played an integral role in the 2016 opening of the three restaurants being managed by The Bartolotta Restaurant Group at the Mayfair Collection – ABV Social, Café Grace, and Taqueria El Jefe. With the launch of the restaurants complete, Zach will head to Mr. B’s, A Bartolotta Steakhouse, in late February 2017 where he will lead the kitchen. With Espinosa’s departure, the kitchen for the three restaurants at the Mayfair Collection will continue to be run by the Bartolotta-trained team. Current Chef at Mr. B’s, Dane Baldwin, will step down at the end of the month. Baldwin started at Bacchus in 2004 where Espinosa served as one of his mentors and worked under him again at Harbor House in 2012.

Mr. B’s, a classic Steakhouse in Brookfield is one of the restaurant group’s most popular locations, opened in 1999 in Stonewood Village and later moved to a larger location on Capitol Drive in 2010 to accommodate the restaurant’s growing popularity. Chef Dane Baldwin has been with Mr. B’s since early 2014.

With almost 14 years of experience within the Bartolotta restaurants,  Zach Espinosa will bring a breadth of culinary and operational knowledge to the kitchen at Mr. B’s. Espinosa also has a great deal of experience with seafood to complement the steak program, as he spent several years as Executive Chef at Harbor House where he was mentored by Corporate Executive Chef and James Beard award winner, Adam Siegel.

Both Espinosa and Baldwin have been vital to the growth and quality of the kitchens they have led within the company. Corporate Executive Chef Adam Siegel says “We are excited to have Zach join Mr. B’s, where we are confident he can lead the kitchen to continued success and we thank Dane for the time and talent he has provided to our company.”

The Bartolotta Restaurants is a Milwaukee-based restaurant group owned by brothers Joe and Paul Bartolotta. Their first restaurant, Ristorante Bartolotta, opened in 1993 and today the group owns and operates 16 restaurants and catering facilities, including five fine dining establishments, three upscale casual concepts, a pizzeria, a barbeque joint, two upscale food courts, a lakefront custard stand, and three exclusive catering facilities. In addition, the company has an operating agreement with three quick-casual restaurants in the Milwaukee airport and manages four restaurants at The Mayfair Collection. More information can be found at bartolottas.com