About The Rumpus Room

The Rumpus Room - A Bartolotta Gastropub combines adventurous but approachable food with a solid craft beer and cocktail program to create a laid-back and appealing downtown gathering place. The Rumpus Room emphasizes Wisconsin products whenever possible. 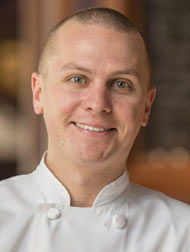 Andrew Koser’s aspirations to work in the food industry began at an early age. While growing up, he was fortunate to travel with his mother’s meeting and event planning company where he was exposed to a diverse array of cuisines and food operations. Andrew toured a culinary school at the age of 10 and landed his first kitchen job at 14 flipping burgers.

Andrew’s high school class trip took him to Paris, France, where he put his French language skills to the test while marveling at the Parisian cuisine. During his final years in high school, Andrew attended culinary classes at Waukesha County Technical College and perfected his knife skills at a local sushi restaurant. Eager to start his professional career after high school graduation, Andrew moved from Brookfield, Wisconsin to Chicago, Illinois. He enrolled in the Le Cordon Bleu program at The Cooking and Hospitality Institute of Chicago while working full-time at the Aria restaurant in the Fairmont hotel.

In 2007, Andrew moved back to Milwaukee to work for James Beard Award-winning Chef Adam Siegel at Bartolotta’s Lake Park Bistro. He was quickly trained on every station in the kitchen, holding high regard for the knowledge and skills he gained with Bartolotta restaurants. However, his desire to travel soon beckoned him to Honolulu, Hawaii, where he was immediately hired to work with another James Beard Award winner, Chef Alan Wong. Andrew spent the next four and a half years working at Alan Wong’s Restaurant on the island of Oahu, where he explored an uncharted variety of ethnic food styles and (of course) enjoyed life under the sun.

In 2013, Andrew decided it was time to move back to his roots in Wisconsin. He returned to the Bartolotta family of restaurants as Sous Chef at Harbor House. He transferred to Joey Gerard’s – Mequon as a Sous Chef, and was quickly promoted to Chef de Cuisine.

In 2016, Andrew moved to The Rumpus Room where he is honing his craft by pairing his culinary offerings with the extensive craft beer and cocktails of the gastropub.