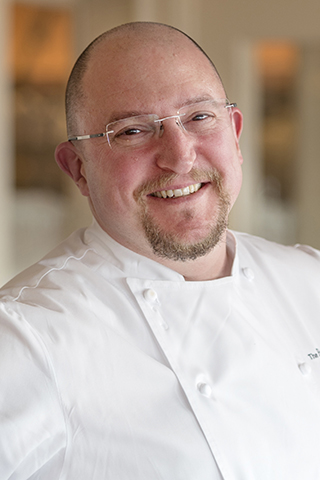 Adam began his culinary career at a very early age, when he worked at his stepfather’s restaurant in Chicago. He attended culinary school at Kendall College and received his formative training at Spiaggia under James Beard Award-winning chef, Paul Bartolotta. Paul went on to become Adam’s mentor and has helped guide Adam throughout his career ever since.

Adam spent three years at Spiaggia and then moved to San Francisco to work for three years with the acclaimed Chef Julian Serrano at Masa’s. A year in Italy followed, where Adam worked at the Michelin two-star Ristorante San Domenico di Imola with Chef Valentino Marcattilii. He then returned to the U.S. to help open Olives in Washington D.C. with James Beard Award-winning chef, Todd English.

Paul Bartolotta knew Adam was the ideal choice when Lake Park Bistro was in need of a Chef de Cuisine in 2000, and Adam spent the next couple of years elevating his skills in the art of French cooking. Adam was named Executive Chef of Lake Park Bistro in January 2003 and began traveling to France when he could, to learn from chefs such as Yves Camdeborde at La Regalade, Pierre Jay at L’Ardoise and Francois Pasteau at L’epi Dupin in Paris.

Adam’s role expanded when he also took over as Executive Chef at Bacchus in 2005. In 2008, following in his mentor’s footsteps, Adam won the James Beard Award for Best Chef in the Midwest, after being nominated two years in a row for the prestigious award. He was the first Milwaukee chef to win this award in almost 15 years, bringing a tremendous amount of regional and national attention to the city and creating the spark for the culinary scene the city enjoys today.

Today, Adam is the Executive Chef for The Bartolotta Restaurants, playing a lead role when the company opens a new restaurant, as it did with Harbor House in 2010 and Joey Gerard’s in Greendale and Mequon in 2012. And as a managing partner of the company, Adam sits firmly at the helm of the restaurant group along with Joe and Paul Bartolotta, working each day to ensure that they’re delivering the best cuisine and the best dining experiences available in Milwaukee and beyond.

When he’s not in the restaurants or at the corporate office, Adam enjoys spending time with his wife and two kids.